Having enjoyed Jordan Peele’s “Get Out”, I checked out his next film “Us”, which I was rather less impressed with. I found it had too many plot holes, required the characters behave foolishly to propel the plot, and like “Get Out” delivered its alternative messages (e.g. on privilege) in a way that was undermined by other parts of the film.

Most of the plot holes relate to the Tethered, who live in tunnels below America, accessible possibly through the sewers, but definitely through a secret door hidden in a house of mirrors in one particular fairground. They subsist off rabbits, which they eat raw. This immediately raises questions: where do the rabbits come from? What do they eat – presumably the answer can’t be “other rabbits”. What do they drink (rabbit blood?)? Why do they eat the rabbits raw, when they have access to fire? Why do the tethered imitate those above, but only sometimes, and barely at all after they reach aboveground? How does the imitation even work, when long thin corridors and small rooms don’t really resemble the above at all, and the people they’d need to imitate next to might have wandered around a corner? Why is there still lighting? Where did the jumpsuits and scissors (not to mention the gloves, handcuffs and ballet dress!) come from? How does the tethering cross over to the tethered’s children?

These difficulties go away if you decide to interpret the Tethered’s situation metaphorically, instead of literally. This is not something done often in media – I think the best example would be Kunihiko Ikuhara’s Yurikuma Arashi. It’s unlikely this was intended, as the presentation is too close to literal, and there aren’t really many abstract motifs – there’s a suggestion that red, as seen in the house of mirror’s EXIT sign, the jumpsuits, and the Hands Across America could symbolise freedom (and its loss, if you want to count the candy apple Addy holds at the start and, at a stretch, blood) but even that’s tenuous. 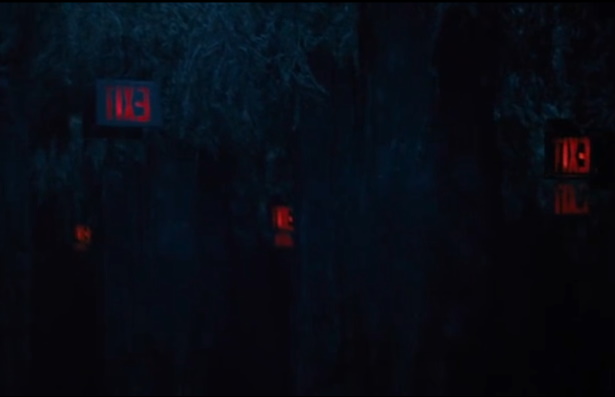 Seen metaphorically, the rabbits merely represent unappetising food. The tethered imitate those above as lower status people might imitate higher status ones – but impractically, as they don’t understand the reasons behind the actions, like the cargo cultists of Melanesia. They stop the imitation as Red helps them develop their own culture and desires beyond merely imitating others. They head aboveground to prove that their culture and work has value, after much preparation – they travel confidently through the exits they previously couldn’t access. Even there, some of the tethered still wish to imitate those above, whether directly (Abraham pushing the glasses he lacks, then taking them) or indirectly (as Dahlia puts on makeup), but for the most part they’re happy doing their own thing.

At first, I thought that the violent uprising would represent violent revolution, as the workers rise up to seize the means of production. I feel like this doesn’t fit, though – rather than being exploited or oppressed they’re completely out of sight. They don’t produce anything for those above, and don’t receive anything. They also don’t produce any works for themselves until the shared uniforms and weapons. They have nothing for those above to steal or take advantage of.

I prefer to interpret the violent uprising as the expression of an alternate culture. Those above do seem to lack this impulse – I was surprised to see, in 1986 America, such an absence of guns; Tyler feels confident enough at his beach house to not even lock his door; a cameraman approaches a man wielding scissors even after hearing they’d been murdering people in the area. Generally, people act without fear. The tethered successfully profit from their alternate cultures in an attempt to make a better imitation of one of the ideas of those above: Hands Across America, but this time a full chain, instead of just one concentrated around population centres. 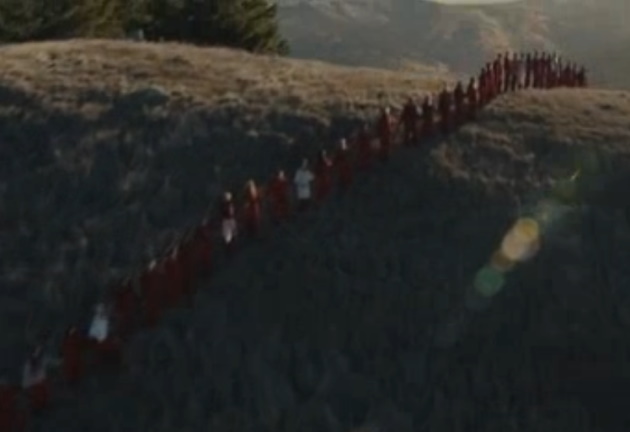 I wondered what the movie was trying to say when it had the Tyler family (rich, white) killed off quickly mid-movie while the Wilson family (middle class, Black) survive. I expect it’s just an inversion of the standard horror trope where the Black folk get killed off. I read a review suggesting it was punishment for focusing on the wrong things in life (wealth), but I don’t feel this works within the movie universe: the Wilsons survive because their doppelgangers decide to split them up and kill them slowly for revenge, while the Tylers’ doppelgangers efficiently kill each family member by just stabbing them in the neck with their scissors. I can’t see a bad decision other than “have more murderous doppelgangers”, which isn’t a choice a character can make in-universe. Generally, the Tethered are efficient killers: the Wilsons win out (lose out?) due to Addy’s personal connection to Red.

At the end, it’s revealed that Addy and Red swapped places earlier, when Addy was a child. I didn’t feel like this changed anything – sure, it reveals Addy was a massive jerk as a child, but she was coming out of a stressful situation (and by this point I was expecting bad decisions under the justification “it’s a horror movie”. There’d’ve been no story had Addy just cooperated with Red and taken the whole thing to the media or something). Jason looks at Addy implying he’s scared, and maybe he knows about the swap. My feeling on this was that she’s still the person who gave birth to him so it doesn’t really matter in the end. Taken metaphorically, there’s a nice sideline to this: he knows she came from bad origins (culturally), and possibly looks down on that. I had to take this metaphorically rather than literally to come to this conclusion because the movie really stresses that the Tethered are also human and American and everything, so I can’t really see them as an ‘Other’ to fight or fear.